The Economics of Freedom

The China/Trump trade war must be considered in terms of authoritarianism vs. freedom and not economics only.

There is a trade war being waged between China and the west, and it is a serious one with far reaching consequences.

The west finds itself in this position effectively through double standards. It demands high standards and high pay at home, but trades willingly with nations with lower ones. China is ‘free-er’ in business than some western countries to the extent that it has looser standards and this helps lead to lower costs – but this is not because China is free or because business is free in China, but rather because it sees the provision of lower costs as an advantage in a trade war with the west. One it appears to be winning today.

While China has lower standards the West is constantly increasing regulations which render it less competitive. This has the effect of free trading western nations closing down their regulation induced un-competitive industries and buying from the authoritarian Chinese regime with none or few of those restrictions.

Presumably those advocating for this in the west think it’s OK to have lower standards in China and buy cheap than to maintain economic and industrial independence at home. Yet, the practical upshot of all this is that free western countries become beholden to and reliant on authoritarian regimes for essential products, strengthening authoritarians and weakening themselves in the process.

Today’s ‘rescue’ of British Steel must be seen in the context of this three act play. In the first act China floods the market with cheap raw material and undercuts western producers who are regulating themselves to oblivion. In the second act Chinese giants buy up the western producers that are struggling to compete. In the third act free western nations wake to realise core strategic industries are now controlled by corporations owned by or loyal to a government that is the ideological opposite of the free west.

Free market purists turn a blind eye to this consequence to some extent, but in so doing they ignore the fact that their ability to remain free diminishes day-by-day. Sure, free marketeers do also decry the high levels of regulation at home, but in the short term we’re propping up our ideological enemies.

China is using trade to increase its power while it sees benefit in doing so, but free nations should not be using trade with China to reduce their own power and independence. Some consistency in the west about whether they really care about standards and freedom would go a long way to balancing this, instead of only caring about them at home for virtue signalling, but accepting lower standards and lower freedoms abroad for the sake of cheap goods. 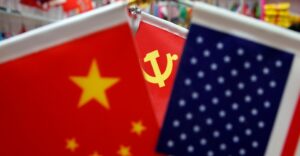 “Working on economic policy at the White House, I came to understand that the stakes of the confrontation are far higher than those of trade alone.

“The trade dispute, though, is now about much more than economics—it’s testing whether a democratically elected government can prevail in the face of the authoritarian government of the world’s most populous country. And everyone who values democracy or human rights should hope that, one way or another, the United States ultimately prevails in that struggle.”

Source: Every American Should Hope Trump Prevails Against China