Against More Top Down Policing

We’ve been promised the kind of police regime that has potential criminals in ‘terror’. It sounds nice, someone who might attack you, rob you, harm you, is too scared to do those things – what’s not to like? Right? I’m absolutely in favour of deterring criminals from violating the life, liberty and property rights of all of us. But is that what Priti means? As with so many things the small-print is everything.

I wrote previously that the drive to increase police numbers by 20,000 will not be enough by itself. Libertarians believe in the individual’s right to defend their rights, life and property, and that assisting citizens in exercising this right to defence is also the primary role of the state.

The problem with simply increasing police numbers is that it assumes a purely state-down approach, disconnects police function from their source of authority (the individual), and can become easily politicised and directed away from the real job of tackling actual rights violations such as violent crime and theft.

My concern with Priti’s language is that we will simply see more top down authoritarianism, and none of the ‘policing by consent’ which recognises that police authority legitimately comes only from the people calling for assistance in defending their rights. My fear is that Priti will establish an ‘agents of the state’ force, and not a ‘servant of the people’ force.

I’d like to see the Peelian principle that ‘the police are the people and the people are the police’ re-established, as the surest way to block tyranny and enable effective policing by consent. We also pledge to de-classify pepper spray to allow individuals to carry and use it for self-defence. You see, policing is not the state trampling us all as potential criminals or granting a state monopoly on self-defence, but rather policing is the result of the individual exercising their natural right to self-defence by calling on the police to assist – or so it ought to be. 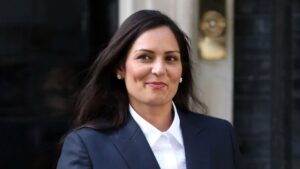