From Helmuth Hübener to Julian Assange, nothing changes, tyrants hate the truth!

The trial of Julian Assange is an example of the state arbitrarily picking and choosing which bits of the constitution it wants to apply to which people, simply because it doesn’t like the truth being exposed. To get round this the US argues that as a non-citizen its constitution doesn’t apply to Assange, but then we must reply by referring to Senator Ron Paul’s observation that in that case Assange, a citizen of Australia, can hardly be tried for treason against the USA.

But we don’t expect the US establishment, and those angered by having the truth told about them, to pay much attention to aspects of law they find inconvenient. (They didn’t for extraordinary rendition, they won’t now.) And, we can see cold irony in a state reacting to having its past bad dealing exposed with yet more bad dealing.

What’s the lesson we ordinary people should take from this? Ignore the crimes of the government – because in telling the truth they will call you the criminal. 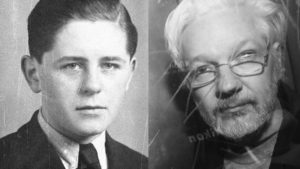 I am reminded of the case of Helmuth Hübener, a young German during WWII who became convinced the Nazi government was lying after listening – illegally – to BBC broadcasts on a shortwave radio. He used what he heard to compose various anti-national socialist texts and anti-war leaflets, of which he also made many copies. The leaflets were designed to bring to people’s attention how skewed the official reports about World War II from Berlin were, as well as to point out Adolf Hitler’s, Joseph Goebbels’s, and other leading Nazis’ criminal behaviour.

On 5 February 1942, Helmuth Hübener was arrested by the Gestapo at his workplace. While he was trying to translate his pamphlets into French and have them distributed among prisoners of war he had been noticed by a co-worker and Nazi Party member, who denounced him.

On 11 August 1942, at age 17, Hübener was tried as an adult by the Special People’s Court in Berlin, who were in charge of matters of treason. Hübener was sentenced to death. After the sentence was read, Hübener faced the judges and said, “Now I must die, even though I have committed no crime. So now it’s my turn, but your turn will come.”

And so will all of our turns if telling the truth becomes a crime. The parallel between the behaviour of the US and UK states towards Assange, and the Nazi state towards Hübener, should concern us greatly. The outcome of this case sets the precedent for us all, whether we can report on the crimes of state actors, whether we can point out their lies, or whether we really do live under tyranny.